Switzerland begin their EURO 2020 qualification campaign on Saturday afternoon, when they face Georgia in Tbilisi.

The Schweizer Nati will hope to start 2019 in style, having not played in over four months. They are preparing to play their first two qualifiers in March, before their attention turns to June’s inaugural Nations League finals in Portugal.

Drawn into Group D of qualifying, Switzerland will play eight matches in their bid to reach EURO 2020. Although finishing in the top two would guarantee them automatic qualification, their Nations League success has secured at least a play-off spot.

Here’s everything you need to know about Switzerland’s opening qualifier.

Switzerland have three high-profile absences for their trip to Georgia, all due to injury. Xherdan Shaqiri pulled out on Monday and was duly replaced by Kevin Mbabu, while Admir Mehmedi was ruled out through illness on Thursday.

However the biggest blow is arguably Haris Seferović, who picked up a groin injury earlier this month. It is a huge blow for both Switzerland and Seferović, with the Benfica man in the form of his life with 11 goals and 5 assists in 10 league appearances this year.

Neither side has played since last November, when they both encountered success in their first Nations League appearances.

Switzerland qualified for the Nations League finals with an outstanding 5-2 win over Belgium, topping Group A2 on goal difference. However their overall form has not been as impressive, having lost 3 of their last 5 outings including an embarrassing 1-0 friendly defeat to Qatar in November.

Meanwhile Georgia earned promotion to League C, going unbeaten as they won Group D1. They are unbeaten in their last 6 games, losing just once throughout the whole of 2018.

It’s been 16 years since Switzerland last met Georgia, with the only competitive meetings between them coming in EURO 2004 qualifiers.

Their last encounter was a drab 0-0 draw in April 2003, but the reverse fixture in September 2002 was far more entertaining. Switzerland ran out 4-1 winners in Basel, with goals coming from legendary players Alexander Frei, Murat Yakin, Stephane Chapuisat and Patrick Müller.

Manager Vladimir Petković is likely to stick with the same 4-2-3-1 formation that has served him so well during his Switzerland tenure, though some notable absentees will force him into some changes.

I would pick the same five-man defence from the World Cup, which includes the return of captain Stephan Lichtsteiner. The Arsenal defender has not been selected for the Nati’s last 4 games, last playing in their 1-0 defeat to England back in September.

With Shaqiri and Seferović sidelined, I believe Albian Ajeti and Mario Gavranović should replace them respectively. Ajeti has been in fine form for FC Basel this season with 16 goals and 10 assists, while Gavranović has been solid for the Schweizer Nati.

Both sides need to get their qualification campaigns off to a strong start, and it certainly won’t be easy. Although Switzerland are the favourites on paper, they have little to no experience of their Georgian hosts and may find it hard in Tbilisi.

The Schweizer Nati are favourites to win Group D, while Georgia are complete outsiders. Petković shouldn’t underestimate Saturday’s opponents, and will be eager to take all three points from the 6,000-mile round trip. 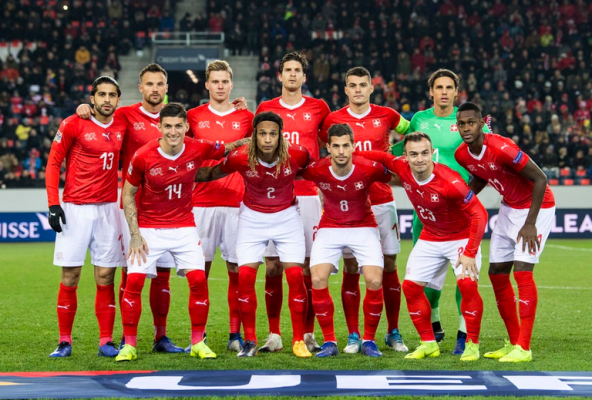